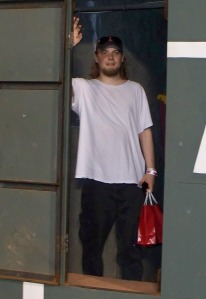 Q:  First off, please introduce yourself and tell us a little about who this J.P. Freeman guy is, where he’s been, and what he’s done.

A: Well, first off let me say I really appreciate this opportunity to say hello to the New England Horror Writers. I’ve never been too good at these types of things but I’ll give it my best shot. A little bit about me … I was born in Maine and I have lived here my whole life. I have always been interested in arts and entertainment. In high school I started to play around with music, joining multiple underground heavy metal bands. I continued down that path for a few years after high school until, I finally realized that it wasn’t something I wanted to do, or could do for that matter, for the rest of my life. I also knew that a regular nine to five [job] wouldn’t work for me. I needed a way to express my creative side. There were too many ideas locked in my head looking for a way to escape. So I picked up a pen and started to let them out. At that point I started to look into horror anthologies, hoping to get a few of my shorts published. I managed to get a few of them published, one of them being Suicide Man, which ended up being the seed that Things Better Left Unsaid sprouted from. 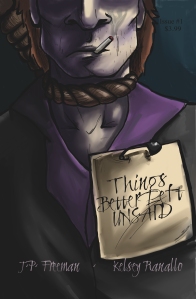 A: Things Better Left Unsaid is the story of a man named, Dale Hicks. Dale is a man at the end of his rope. With nothing left to live for, he decides to end his miserable life. Only, things don’t go exactly as planned for Dale. He wakes finding himself in a strange place surrounded by strange people. Unable to find a way out Dale hits rock bottom. Just when things seem like they couldn’t get any worse, a chance encounter with a little girl turns Dale’s existence upside down.

Suicide Man is the name of the short story in which Things Better Left Unsaid is based, but the two stories are very different. I think when you pick up the first issue and see the first page you will see why Suicide Man was an easy first choice. In the end I just thought the comic should have a name of its own so I went with Things Better Left Unsaid.

Q:  Most obvious question, why did you choose the comic book medium for this tale?  Did Things Better Left Unsaid exist in any other more traditional formats prior to this decision?

A:  As I mentioned earlier, this was originally a short story I did called Suicide Man. I set out working on a collection of short stories and Suicide Man was the first or second story that I came up with. As I tried to move forward I kept thinking about how I could link these new stories to Suicide Man, or how I could have used these new ideas to make that story even stronger. So my collection of random short stories started to become a book of stories about the same group of characters and they all tied in at the end. There was just something about these people that kept calling to me to tell their tale. It started to seem like Dale didn’t want to die after all, like maybe he had a bigger purpose.  To me it seemed like a television show on paper more than a collection of short stories. Then I thought “man, this would be cool as a comic book.” I didn’t really think a comic book would be possible because I can’t draw all that well. So I put out an ad to see if I could find anyone that would be interested in illustrating for me. I got over a hundred applicants! I was pretty amazed by the response. I sat and looked through all the drawings people sent in and narrowed it down to a handful. After that I contacted the few that I was interested in working with and Kelsey Ranallo stood out among the applicants and I quickly signed her on as the artist for the comics.

Q:  Tell us a little something about the artist you have turning Things Better Left Unsaid into a work of visual art.

A: Her name is Kelsey Ranallo. She’s the best. I came into this project not knowing and proper terminology or specifications, nothing. She had to take the time to explain things as we went along (which I’m sure wasn’t fun for her) and keep me from losing my mind in the process. She had me script out my story into comic book pages and panels and describe in detail my character concepts. The next thing I knew the people in my head were coming to life on paper! That has been the coolest part for me, actually seeing my characters in action.

Q:  How many issues are you aiming for with this story?  What are the plans for it once it reaches its conclusion?

A: There are going to be 8 issues. Once they are all finished the series will be released as one graphic novel.

Q:  What’s the release schedule look like for this series?  What are your plans for getting your story out to the masses?  Any publishers or comic book imprints looking to scoop this up?

A: As of right now it looks to be quarterly. I hope to get them out faster but for right now that is the plan. The first issue will be out January 13th. Each issue will be twelve pages and the graphic novel will be 96 pages when completed. I plan to self release the comics via www.comixpress.com and I will be offering signed copies on my website at www.jpfreemanpresents.com. I am also looking into making it available in digital format but that will be down the road a little bit. So far I haven’t submitted it to any publishers, but if you know of anyone interested send them my way!

Q:  What’s next for J.P. Freeman?  Tell us about your plans after Things Better Left Unsaid?  If it’s successful, do you see yourself sticking with this medium or going back to a more traditional form of storytelling?

A: There are a few things in the works for me. I plan to continue writing short stories and to put out a collection of them in the near future. I would also love to sit down and write my first novel this year. If Things Better Left Unsaid catches on I would definitely like to continue writing comic books as well (as long as people want to read them). I am really enjoying working on a project with a continuing story arc.

Q:  Any advice for aspiring writers who want to challenge themselves and the status quo of genre fiction writing?

A: Even though it feels like everything has been done before, it’s important to come up with something original. Make sure to put your own little twist on anything you try to create. Don’t follow the rules of writing. Make your own rules and push the envelope. Be sure to write everything down. All your ideas, as small as they may seem at the time, may come in handy in the future. A lot of Things Better Left Unsaid came from bits and pieces of multiple stories and ideas fused together. Don’t ever completely scrap anything. That idea that seems terrible today might not seem so bad after all in the future. I can’t count the times I woke up in the night with a bit of a story stuck in my head. I sleep with a notebook next to me so I can jot down any ideas that come to me in slumber land. Also don’t show anyone what you’re working on until it’s finished. If you let someone close to you read a work in progress they may steer you in a direction you didn’t intend to go. Don’t let others corrupt your baby.

Q:  Anything else you want to tell us?  Advice?  Comments?  Shameless plugs?  Go for it!

A: I just hope everyone stops by and says hello on one of my sites or pages. I would really appreciate it if people would like my author page on Facebook, www.facebook.com/jpfreemanpresents and stop by my website at www.jpfreemanpresents.com. There will be links there for Things Better Left Unsaid as well as my other available projects. I enjoy interacting with other writers and fans so don’t be shy.

Doug Rinaldi is a member of the NEHW and a part of the publicity committee.