Timing Not Perfect for Boskone 49

Would you have the wedding rehearsal after the wedding? No, I didn’t think so. So I am a little confused as to why the sci-fi convention Boskone would be held about a month after the much larger spectacle of Arisia, in the exact same hotel, no less. This would be like going to watch the Super Bowl on the jumbotron of the stadium it was played in a month after it was over and everyone else had left. That would be something of a letdown, right? Oh sure, the vendors would still be open and you could pay ten bucks for a beer if you really wanted to, but it’s not the same thing. Now, by contrast, if they had played the first Giants/Patriots Super Bowl on the jumbotron in the stadium a couple days before this year’s, that might have been cool. It would have been a primer for what was coming. 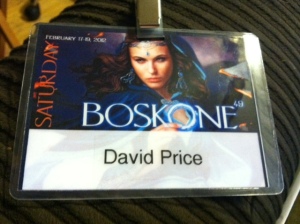 All right, admittedly, every time I have been to some sort of fan convention in the last six months, it has been a first time for me. But maybe, just maybe, that means my opinions should matter, just a little, if some of these cons want to actually attract newbies. Boskone is very much like a primer or practice run for something as grandiose as Arisia. I’m not saying that both shouldn’t exist together in the same world, but I can’t help but feel that Boskone should be held before Arisia, not after. Just four weeks before Boskone was held, I was completely overwhelmed by the magnitude of Arisia. Held at the Westin Boston Waterfont, Arisia seemed to make use of every single conference room in the hotel. To be honest, I’m surprised the Westin had enough space available to accommodate the seemingly hundreds of events that Arisia had going. As I walked around with my eleven year old daughter at Boskone, I found myself asking, where’s the rest of it?

Also, what’s with almost all of the vendors selling books? Nothing against books, per se, but don’t sci- fi fans also like to wear cool geeky t-shirts, watch movies, and own toy props from their favorite series? There hasn’t been as much of that as I expected, at either Boskone or Arisia, to be honest. Arisia had a better mix, to be sure, but still fell short of my expectations when it came to vendors. My daughter was drawn to a woman who sold stuffed animals of every imaginable species. She even had dodo birds! My daughter, Kayleigh, asked for a monkey backpack. Since she was nice enough to accompany me to something that she had no idea if she would enjoy, I bought it for her. 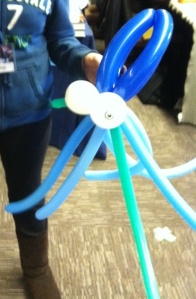 We sat down and watched the Higgins Armory put on a display of medieval sword fighting for a while. This was cool for me, because I actually took those classes at the Higgins Armory about ten years ago, so watching it brought me back to the fun I had learning that style. It wasn’t the most exciting thing for an eleven year old girl, however, so we eventually moved on. The most fun we had together was at the art show. I was happy to see how all the artwork appealed to my daughter, since I have loved fantasy art for as long as I can remember. I wish we had more money on hand, because there was a piece Kayleigh really admired, but I couldn’t afford it. We must have walked through the art show a half-dozen times and I saw something new each time. Knowing what I know now, I’ll be more ready for it next time.

I will say this about Boskone, it has a much more personal atmosphere than Arisia. There were reserved tables all over the place for groups to get together and game, chat, hang out or whatever. But since I am not a member of any of those groups, that part of the con was lost on me. As Kayleigh’s enthusiasm started to wane, I finally talked her into checking out the kids section that they called Dragon’s Lair. She didn’t want to at first, since it seemed to have mostly younger kids in there. She gave in at last, because the children in Dragon’s Lair were obviously having fun. While Kayleigh was in the kids’ section, I spent some time going through a display that advertised many of the upcoming cons. I’ll give many of them a try this year, and I have a feeling I will have a much better idea of the what will appeal to me after all is said and one. 2012 is going to be an interesting year. After goofing around in there for a little while, Kayleigh came out with a balloon animal squid. That was pretty cool, since a giant squid attacks my hero and his friends in my first novel. 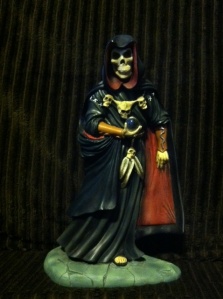 A lich. Photo by David Price.

Before we left, Kayleigh insisted I buy something for myself as well, especially since we couldn’t afford the art we had been admiring. I finally settled on a small statue that truly embodies my two favorite genres; horror and fantasy. The statue is of a lich. If you are unfamiliar with the term, consider it an undead sorcerer. There is just something about it that is inspirational to me. I guess when I look at it; I imagine that it is what my muse probably looks like, when I am writing my particular brand of monster fantasy. Anyway, Boskone 2012 was also Boskone 49. I imagine the organizers are planning something big for the fiftieth anniversary of Boskone next year. Maybe that’s why this one seemed a little small to me. Perhaps they are saving up the big guns for next year. I guess I’ll just have to wait and see.