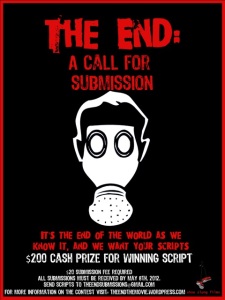 Shoe Slung Films is producing an apocalyptic anthology and wants you to write one of the films. The anthology is titled The End: A Collective and will feature 10 short films about the end of the world by nine directors.

We will be accepting submissions of short scripts, no longer than 15 pages, to produce for the anthology. The winner of the competition will be selected by committee and announced through social media.

Submissions must be received by May 8. The cost of submitting is $20, which is non-refundable.

The winner will receive:

■$200 cash
■An on-set invitation to witness the filming in action
■And have their work produced and featured in a full length anthology Submissions and inquiries can be sent to theendsubmissions@gmail.com

Any money received that does not go towards the cash prize will be donated to the charity Jaden’s Ladder.