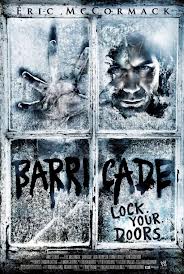 Barricade (2012), the latest offering from WWE Studios, stars Eric McCormack (Will & Grace) as Terrence Shade, a recent widower who finds himself struggling to bond with his two children after her death. He takes the kids to a mountain cabin to experience a white Christmas, but what waits for them there is less ho-ho-ho and more ho-ho-horror.

After a cozy evening by the fire followed by a snowball fight in the morning, the Shades soon realize that something’s not quite right. All three of them are sick, but Terrence is unable to drive them all in to town for help, as their vehicle has been buried in snow by a blizzard. Terrence, his daughter and son are forced to hole up in the gloomy cabin, where nothing is as it seems. Terror and cheap thrills ensue.

This straight-to-video fright fest wasn’t bad for what can only be classified as ‘B’ horror. The creepy music plays up to sudden “gotcha!” moments, and a few times, I laughed at myself for jumping. I did find some of the apparent inconsistencies frustrating, but as the movie developed a Jacob’s Ladder feel, I realized that what I’d originally thought were consistency errors were in fact deliberate clues that helped play out the storyline. Once I accepted that not everything I was seeing was as it really happened, I was able to relax my OCD tendencies and enjoy the film more.

The role of concerned father trying to protect his kids is a stretch for McCormack, who is better known for comedic roles. He did fine, and I could feel his frustration at not being able to help his terrified and sick daughter and son. The children, played by Conner Dwelly (Passengers) and Ryan Grantham (Diary of a Wimpy Kid) were predictable as a preteen girl and younger brother, respectively, varying from irritating each other to providing sibling support.

Barricade, overall, isn’t going to win any Academy Awards, but it kept me interested. Definitely worth the buck at Redbox.

One comment on “‘Terror and Cheap Thrills’ in New Movie ‘Barricade’”