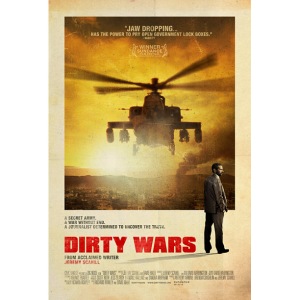 Dirty Wars, which was released in June, follows investigative reporter Jeremy Scahill, author of the international bestseller Blackwater, into the heart of America’s covert wars. He travels from Afghanistan to Yemen, Somalia and beyond.

“The war on terror is the most important story of our generation,” said Rick Rowley, director of Dirty Wars. “It’s the reason why I became a war reporter a decade ago, because this is the longest war of our history. We passionately believe the American people have a right and a responsibility to know about the wars being fought in their names around the world.”

This global war on terror has killed thousands and thousands of people, including American servicemen, he said. It has also cost billions of dollars.

“It’s unfolding mostly in the shadows without any public knowledge or without any meaningful congressional oversight,” Rowley said.

Rowley and Scahill wanted to make a film that would bring the war out of the shadows and into the light of public discussion, he said. He wants people to have a conversation about the war, what the United States is doing in the world and what’s becoming of us as a nation, he said.

There were dangers for Rowley and Scahill while they were filming.

“It wasn’t safe for us to travel around with a big crew, so it was just Jeremy and I traveling together,” Rowley said.

Jeremy was the interviewer and on-air talent, while Rowley was the behind-the-scenes person responsible for filming, sound and doing any other production function required of him, he said.

“In each country, we figured out a different way to work and to keep us safe.”

They grew their beards out, dressed in local clothing and drove around in a beat-up Toyota in Afghanistan, he said. They had to feel out the edge of how far they could safely go outside of Kabul.

“We had to go out and came back before the sun set, because the Taliban take control of the roads at sunset.”

Their calculations were wrong occasionally, which is shown in Dirty Wars when they were trying to return to Kabul, Rowley said. There was an ambush, which caused them to be stuck on the road after sunset. They ended up hiding out in a room nearby until sunrise when they could travel safely again, he said.

There plan was to fly below the radar in Afghanistan, but in Somalia it wasn’t a possibility.

“The only way for us to move around was with security,” Rowley said about filming in Somalia. “We never liked the high security because it changes the way you operate in a country.”

In Somalia, they had to drive around with twelve soldiers armed with machine guns, a decoy vehicle and motorcycles riding with the convoy, he said.

“I have never been in a city as dangerous as Somalia. It really is a surreal place.”

They were there filming at the height of the battle between the local insurgency and the African Union. The insurgents weren’t accurate with their weapons past 100 meters, Rowley said.

“We felt relatively safe in that you had to be very unlucky to get hit.”

Jeremy did tell him that he saw the insurgents spraying bullets trying to hit him after seeing a white guy with the warlord, Rowley said.

“Luckily, I didn’t see it or I would have changed the way I was working there.”

Rowley did recount a story that one of the warlord’s troops told him about another journalist who was shot and killed in the exact same spot they were filming at.

The entire filmmaking process took about three years. The film cost between $300,000 and $400,000. It was financed by a number of different foundations, Rowley said.

“It’s a film that wouldn’t have been commissioned by a television network.”

This movie could have only been made with help from the nonprofit sector because of the risks and the scope of the investigation, he said.

Dirty Wars opened at Real Art Ways in Hartford, CT on Friday, July 12. The theater is located at 56 Arbor Street. Director Rick Rowley will be attending the 2:15 p.m. screening at RAW today, which is hosted by the ACLU of Connecticut with Medea Benjamin of Code Pink