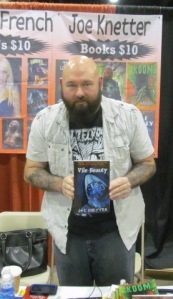 Author Joe Knetter started writing ten years ago after being a lifelong horror fan. His start came when he was online and found a publisher who was looking for stories.

“I thought it would be fun to give it a shot, so I wrote four and sent them in.”

All four of his stories were accepted, he said. Since then, he has written many more stories with interesting titles. His favorite title is “For the Love of Orson Welles’ Fat Black Ejaculate,” which can be found in his collection, Vile Beauty.

“It doesn’t make any sense whatsoever,” Knetter said about the title. “I was stoned one night. I just randomly said that. I can’t remember what about.”

He ended up writing that story for a gross-out contest. After submitting it and people started reading it, the contest organizers changed the rules so that his story was excluded, Knetter said.

There are times Knetter will come up with the title first, then work the story around it.

He has a new story, “Crack in the Sarcophagus,” appearing in Canopic Jars: Tales of Mummies and Mummification, which debuts this month at Anthocon.

He loves attending horror conventions, and attends quite a few. When he first started out, he would attend up to 14 a year. This year he has only been to three, including Rock & Shock.

“Being that there are so many shows across the country, it kind of gets oversaturated a little bit.”

At his first convention, his goal was to sell one book. At one of the many conventions he has attended since that first one, he met his girlfriend of four years, Sarah French.

“The goal is always to make money, but it’s just as important for me to network,” Knetter said about conventions. “The shows are fun. It’s great to meet people.”

He did have a fan come to a show once whom he later found out was disturbed. This fan later arrested for putting bombs in vibrators, which is what Knetter used in one of his stories, he said. The fan was caught before anyone got hurt. He would have felt bad if someone had gotten hurt, but realized that if the fan didn’t react to something he wrote, he would have reacted to someone else’s work.

“Lucky enough, he was stupid enough not to do it right. Thank god. Horror fans are good people generally. They’re not troublemakers.”

He did have another fan buy one of his books that was poorly edited early on in his career. This fan highlighted his mistakes in the book then brought it back and gave it to him, Knetter said. “That was pretty comical, actually.”

Inspiration strikes Knetter everywhere. He has used an old mental hospital his mother worked at as a setting in a few stories. He has also written about a haunted hotel his girlfriend lived in while growing up. His story, “Room 17,” describes what happened at that hotel.

“I had to change the name of the hotel by one letter. Legally, I’m good to go now.”

He has been inspired by the early work of Clive Barker and is a huge Stephen King fan. His work has been compared to Wrath James White and Edward Lee.

His advice to writers is to just write, but don’t expect to make money, because writers don’t make much.

“Write because you have to tell the story and hope that you get lucky enough that it finds someone who likes it. You have to keep writing.”