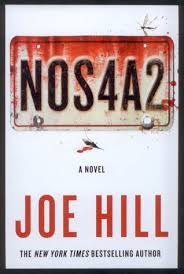 Joe Hill’s third novel, NOS4A2, is a witty, terrifying ride into the creepy world of Charlie Manx, who creates a Christmasland of horrors and carts off young children in his Rolls Royce Wraith to join in the fun. If your idea of fun is akin to hunting humans, that is.

Vic McQueen is our heroine. We meet her as a young girl, when she discovers that while riding her bike, she can escape from her unhappy home into other places and worlds. She is, in fact, the only child to escape Christmasland, a fact that does not sit well with Manx and his assistant, Bing.

Vic escapes Manx’s clutches with the assistance of Lou Carmody, an overweight, socially awkward comic book aficionado, and the two soon find themselves together and raising their son, Bruce Wayne. Nope. Not kidding. They named the kid after Batman. It is this kid that Manx and Bing target, and this kid that Vic and Lou must work together to save.

Names seem to be pretty important to Joe Hill, and also serve to showcase his fabulous sense of humor. Charlie Manx is reminiscent of another Charlie M, one with a big, murderous family from the late 60s. Bing is the name of both a search engine (fitting, since he searches out kids that, in his mind, are better off in Christmasland than with their horrible parents) and of a famous holiday crooner. I like to think of the NOS4A2 Bing like the latter: as Crosby’s son would spill in a nasty tell-all book, Bing was not the nice guy he appeared to be; nor is this one. Vic McQueen is a tough, sexy, rebellious motorcycle enthusiast, and her childhood parallels that of late actor Steve McQueen. He too had fond memories of a childhood bike, ran away from home, and had daddy issues.

The understated hero of this novel is Lou Carmody, who was by far my favorite character. His love for Vic and his son are unquestioning, and quite frankly, you’ll like Vic a little less because of the way she treats him. Though it is Vic who must return to Christmasland to face her demons, she wouldn’t get there, get it done, and get out without Lou’s unwavering support and assistance.

The problem I’ve had in the past with Joe Hill’s work is his endings. I wasn’t crazy about how Horns wrapped up, and I positively hated the ending of Heart-Shaped Box. (I have heard the same complaint from others about Hill’s father. Personally, I feel you do not have the right to complain about Stephen King until after you have written a bazillion bestsellers yourself. Until then, shut up.) And here’s where NOS4A2 differs: I loved, yes loved, this ending. Yet again Hill lets his delightful funny bone shine through, and he did it in a wonderful way. Here’s a hint: if you didn’t read the Acknowledgements and A Note on the Type following the last chapter of this book, then you did not read NOS4A2 all the way through.

Overall, I found this to be well done, a little wordy at times, but worth the ride.