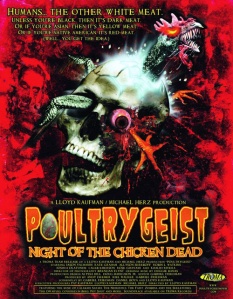 Poultrygeist: Night of the Chicken Dead is vulgar, politically incorrect, and completely unapologetic about it. The premise of this ridiculous romp is that a fried chicken franchise, American Chicken Bunker, has been built on top of a sacred Native American burial ground in Tromaville. The site is also chock full of toxic waste (this is, after all, the same town that birthed the Toxic Avenger). Our hero is Arbie (Jason Yachanin), who discovers his high school sweetheart, Wendy (portrayed by Kate Graham) has turned gay while away at college, and is now protesting the new chicken franchise in Tromaville. Arbie, in turn, gets a job at the restaurant to spite her. As Arbie sings (this movie is also a quasi-musical): “Revenge is a dish best served fried.”

Things quickly go south as patrons of the restaurant get sick and eventually turn into giant mutant chickens from eating the toxic poultry. There is one particular bathroom scene that is so disgusting, repulsive, and full of excrement, that teenage boys everywhere will be cheering.

The climax of the movie shows patrons being murdered in gratuitously gory ways including sliced to death by deli slicer, impaled by chicken nuggets, and a guy’s legs being ripped apart like a wishbone. Arbie, fellow employee Hummus, Wendy, and a random little girl are able to fight off the chickens with alcohol, but it is Hummus who sacrifices herself so the others can escape.

While silly and spoofy, this movie is entertaining, too. Highlights include a cameo by Ron Jeremy, and nods to films like Jaws, The Exorcist, and Alien. Although campy, this is also a commentary on corporate greed: how chain franchises and large corporations are putting mom-n-pop stores out of business, contributing to child obesity in the country, and basically dumbing down America. Yes, this could be a serious introspection on the heartlessness and cold greed of corporate America, if not for all of the topless girls and “choking chicken” references.