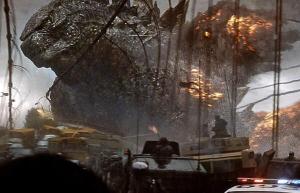 During the opening credits of Godzilla, the audience learns that the government never “tested” atomic bombs, as was widely believed. The sole reason why atomic bombs were detonated during that time period was to try and destroy the King of the Monsters. After the opening credits, the audience learns that it’s 1999 and there is a dig going on in the Philippines where something big is discovered. Is it Godzilla? Well, there is a huge skeleton plus something is dormant. There is also something that was awakened and got away.

The movie then goes from the Philippines to Japan where we are introduced to the Brody family: Joe (Bryan Cranston), Sandra (Juliette Binoche), and Ford (Aaron Taylor-Johnson). It’s Joe’s birthday, but he’s so busy with his job that he’s up earlier than normal, which causes Ford not to be able to hang his dad’s birthday banner that he has made. Joe is working at a nuclear power plant that is being affected by tremors. And the audience already knows, these are not naturally occurring tremors.

Taylor-Johnson, the secondary star of the movie after Godzilla, wasn’t recognizable with his shaved head. I didn’t realize I had seen him in such movies as Kick-Ass, Savages, and one of the after-credit scenes in Captain America 2: Winter Soldier, portraying Quicksilver.

Director Gareth Edwards has brought audiences the Godzilla movie that audiences have been waiting for since the disappointment of the 1998 version. He keeps the movie interesting and has us anticipating the appearance of Godzilla. He teases the audience with bits and pieces of him throughout the movie, until finally revealing Godzilla in his full glory near the end when he is battling the MUTO, giant insect parasites.

At the end this movie, audiences will be satisfied, exhilarated, and looking forward to his next appearance. Hopefully, Edwards will be helming it.

This movie gets five out of five stars.