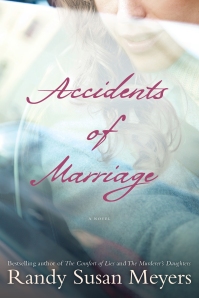 Randy Susan Meyers’ latest riveting offering, Accidents of Marriage, takes the reader through the strained workings of an unhappy marriage to the shattered remains after this marriage implodes. Ben and Maddy are struggling to raise three children and keep their relationship balanced, while the dark cloud of Ben’s temper always looms overhead. It’s Ben’s hotheadedness that results in a terrible accident which lands Maddy in the hospital with a traumatic brain injury.

Seamlessly told from the perspectives of Ben, Maddy, and Emma, their 14-year-old daughter, Meyers takes us through the cycle of Maddy’s transformation from victim to survivor, and the impact her accident has on the family dynamic. Blame is thrown like paint across a landscape, and nobody escapes the feelings of guilt, shame, and hopelessness that accompany it. The reader will find Maddy both likeable and oblivious (after all, she works with abused women, yet can’t seem to recognize the signs in her own marriage). Emma comes across as a true teenager, at times entitled and shallow, but as her role within the family changes after her mother’s accident, alarmingly burdened with the responsibility of keeping things running smoothly. She’s an empathetic character with a teenage attitude: the reader feels pity for her, but sometimes, her selfishness is aggravating. Kudos to Meyers for capturing the essence of the average American teenage girl.

Most surprising is Ben, who begins in this novel as a truly unlikeable and selfish man. His struggle throughout the book to do right by his family and better himself improves his character immensely, to the point where the reader almost feels sorry for him. Almost. Let us not forget he is the one who put Maddy in the hospital to begin with, and while the reader can draw a conclusion as to whether Maddy should forgive him, it is ultimately Maddy’s decision, after all.

Accidents of Marriage is an intriguing read that will leave the reader questioning what they themselves might do in such a complex and intense situation. This novel’s captivating narrative of family transformation makes Ben, Maddy, and Emma impossible to forget.

The book will be released on September 2. You can preorder through Amazon by clicking here.