Jessica Sonneborn in The House Across the Street.

In The House Across the Street (2013, Eyethfilms) Amy Fielder (Jessica Sonneborn) has just moved from Kansas, and rents an apartment from Tom (Ethan Embry), a creepy landlord whose over-eagerness to rent to her should have made Amy think twice from the get-go. Amy finds herself fascinated by the house across the street, and watches the goings-on over there cautiously and voraciously. She also starts meeting some of her neighbors, none who seem too eager to give her any information about the house that fascinates her so.

The neighborhood where Amy now lives must be the friendliest in New England, because Mr. Barnes (Alex Rocco) keeps insisting she come over for lunch, and Ned (Courtney Gains, who still evokes memories of Malachai from Children of the Corn even as he approaches middle age) invites her to her home and offers to bring her food. The only people who aren’t friendly are the cops—after Amy finds a woman laying in the road, Officer Peterson (Eric Roberts) warns her not to make trouble, and Amy is subsequently pulled over by the police three more times. The only person who seems willing to help is Kyle, an officer who is also fairly new to town. But the message Amy continues to get from both cops and neighbors is the same: leave well enough alone.

Apparently, this isn’t in Amy’s nature, because after snooping around town hall and getting sideswiped by a car for her efforts, she decides to check out the house across the street for herself. Now on crutches, she hobbles from room to room until she finds Daisy (Sara Murphy), the daughter of the woman who was lying in the road earlier. Daisy is drugged and weak, but Amy manages to get her out of the house and hides her away in her own place across the street.

The movie moves rapidly at this point, as Amy starts to piece together the clues and figures out what’s been going on at the house across the street and who is involved. It turns out that Amy can trust nobody, and her world and new friendships start falling apart as we head to our violent and bittersweet conclusion.

The House Across the Street boasts a dynamic, talented cast that doesn’t disappoint. Roberts is completely at home in his role of small-town officer walking that thin line between keeping citizens in line and protecting the people in his town. Alex Rocco is brilliant (as always) as the forgetful, bumbling Mr. Barnes, and stole every scene in which he appeared. Courtney Gains, Ethan Embry, and Josh Hammond were also notable in the film. The movie was entertaining, though it did drag in places, and the scriptwriters missed a golden opportunity to add the twist of unreliable narration when Amy ran out of antipsychotic medication. Some of the methods in which Amy figured out the truth seemed contrived, yet others were pretty clever. Overall, The House Across the Street was slow, suspenseful, and disturbing—all good things.

The filmmakers behind Inkubus, Infested and Self Storage will be showcasing their latest production Army of the Damned at Rock & Shock 2013. Along with a special invite-only premiere on Saturday, October 19, the film’s producer, director and cast will be meeting with fans all weekend long.

Some say that New England is quickly becoming the Hollywood of the East and thanks to Rhode Island based producer Chad A. Verdi and writer/director Tom DeNucci, they may just be right. The duo have cranked out hometown horror with Hollywood legends and their latest endeavor is no different. Boasting an all-star cast including Tony Todd (Candyman), Academy Award nominee Eric Roberts (The Expendables), *NSYNC ‘s Joey Fatone (My Big Fat Greek Wedding), Sully Erna (lead singer, Godsmack) and professional wrestlers Tommy Dreamer, Maria Kanellis and Thea Trinidad, Army of the Damned is poised to once and for all put the East Coast on the movie making map.

To celebrate the release of the Rhode Island helmed horror flick, Verdi, DeNucci and the film’s cast will be heading up to Worcester, MA to premiere the film at Rock & Shock 2013. Joining the film’s aforementioned stars will be David Chokachi (Baywatch), Nick Principe (Laid to Rest), Jackie Moore (Atlantic Rim), Tom Paolino (Inkubus), David Gere (Remains) and Billy Vigeant (The Fighter).

Army of the Damned follows the crew of a hit reality TV show as they chronicle the lives of local cops in a sleepy town. When things go horribly awry after a call that brings new meaning to the term “domestic disturbance,” these small town cops must put their lives – and their training – on the line if they want to make it out alive and avoid joining the Army of the Damned.

Rock & Shock, now in its 10th year is an annual convention that brings together monsters, music and mayhem for three days of frightening fun! This year’s event will see the likes of Robert Englund(Nightmare on Elm Street, Hatchet), Robert Patrick (Terminator 2: Judgment Day, The X-Files), Michael Rooker (The Walking Dead), Scott Wilson (The Walking Dead), Gunnar Hansen (Texas Chainsaw Massacre), Katharine Isabelle (Ginger Snaps, American Mary) and many more signing autographs, taking pictures and meeting fans from all over the world. In addition to Twiztid, this year’s live performers include Danzig with special guest Doyle and Kevin Smith and Jason Mewes; who will be screening their new film Jay and Silent Bob’s Super Groovy Cartoon Movie and answering fan questions with a live podcast.

For a complete list of attendees and up-to-the-minute announcements, please visithttp://www.rockandshock.com. 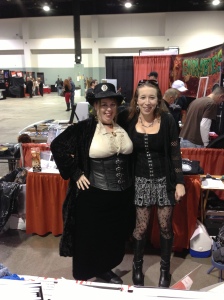 A birdeating spider being sold at Rock and Shock. Photo by Jason Harris.

Snakes being sold at Rock and Shock. Photo by Jason Harris. 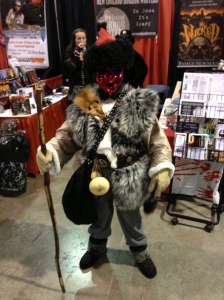 A Rock and Shock attendee at the NEHW booth. Photo by Jason Harris. 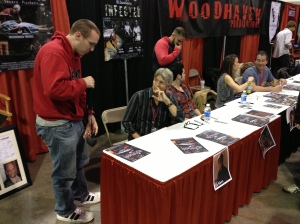 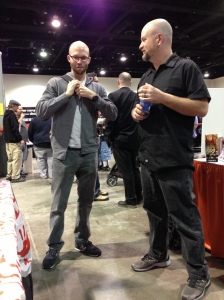 A horror fan visiting the NEHW booth at Rock and Shock. Photo by Jason Harris.

Josh Letourneau, of Ridgefield, New Hampshire, and Jason Campbell, of South Florida, were at the convention with Fright Kingdom. Photo by Jason Harris. 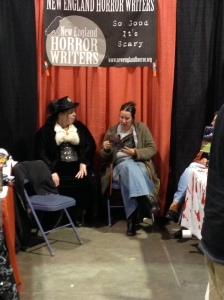 Authors Trisha Wooldridge and Kristi Petersen Schoonover at the back of the NEHW booth. Photo by Jason Harris. 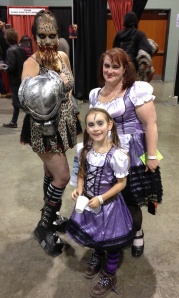 Tina Blamire, of Lynn, MA. in the Predator costume with Meg and her daughter, Fiona, both of Bradford, MA. They were with the vendor, Fiona’s Fright Shoppe. Photo by Jason Harris. 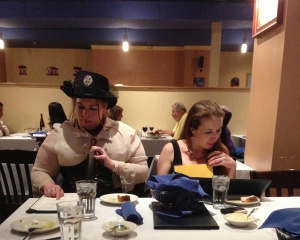