Welcome to the second entry of pictures taken at this year’s Rhode Island Comic Con.

Actor Tom Wright (All My Children). 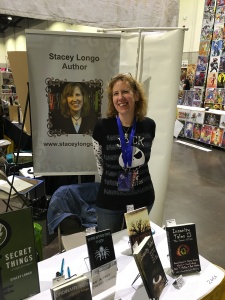 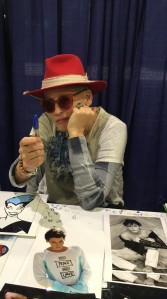 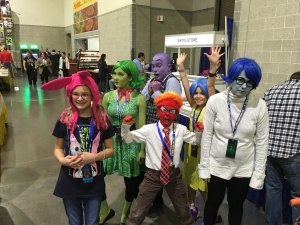 Disgust, Fear, Anger, Joy, and Sadness with a convention attendee.

Ace Ventura dancing with a fan. 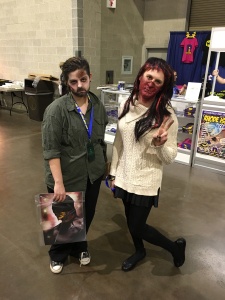 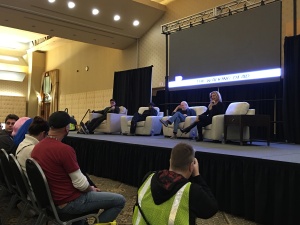 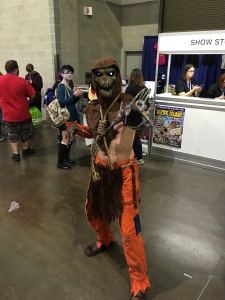 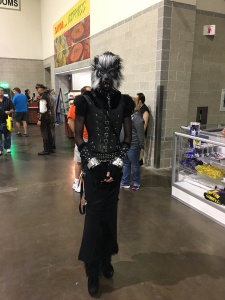 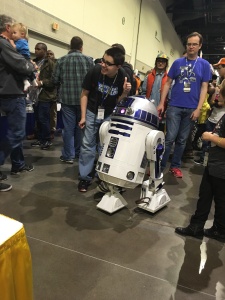 Me with Orlando Jones (Sleepy Hollow).

Fear. It’s the horror writer’s bread and butter because; well we’re all afraid of something, right? As horror writers, we do our best to convey our own irrational fears into our stories; hoping they strike a chord with the reader who wants to be scared. To me, it’s those phobia-type fears, the ones you just can’t explain why they freak you out so much; they make the most memorable stories. I mean, sure, death is usually going to find its way into any horror story, but that’s the easy one, isn’t it? Everyone’s afraid of death. But, it’s those little phobias that we don’t want to admit we have, which a horror writer can still use to give us the heebie- jeebies. A good horror writer will latch onto one of these “irrational” fears, probably something they have lived with themselves to some degree, and do their best to transfer that terrifying experience to the reader.

Claustrophobia’s a good one to start with. How many of you are afraid of tight spaces? I know people who can’t get an MRI without a sedative or watch movies in which someone is buried alive. Even elevators bother some people, I assume because they feel trapped for a while. Tight spaces never use to bother me at all. Growing up, I thought spelunking (cave exploring) looked like a pretty interesting hobby. When I was younger and my parents took us on vacation, I always wanted to check out the local tourist caves or mines. There was something hidden and mysterious down in those dark corners of the earth that appealed to me.

About five years ago, my wife and I took our kids to see a natural tourist attraction, the Lost River Gorge, up in the White Mountains of New Hampshire. There was one rock formation called the lemon squeezer that you have to twist and maneuver your body through. Everyone with claustrophobia avoids this particular attraction like the plague. My seven-year-old daughter squirmed her way to the other side, so I decided to give it a shot. Well, you guessed it, I got stuck. I couldn’t move for about thirty seconds no matter what I tried. That’s when the panic hit me. My heart started racing. Before I completely lost my cool, I tried in my calmest voice to explain to my daughter that I was stuck. Let me tell you, immobility is the wrong time to get an adrenaline rush. I realized that I had to calm myself down, if only for my daughter’s sake. I closed my eyes and took deep breaths until I could feel my heart slowing to a more reasonable beat. When I collected my thoughts, it occurred to me that backwards was the best option. I reversed the twisting that got me there in the first place and slowly backed my way out to freedom.

For years after that, my chest tightened up every time I remembered the event. My heart raced when I watched a scene from the movie The Descent where one of the spelunkers gets stuck in an impossibly tight crevice. She panicked and so did I. Now, I used to love that movie, and the first time I saw that scene it didn’t bother me at all. After my incident with the lemon squeezer, I could barely watch it. I avoided watching another favorite of mine, Kill Bill: Vol. 2, during this time as well because of the scene where Michael Madsen buries Uma Thurman alive. I just couldn’t take it.

I’d say claustrophobia had a good grip on me for three years or so, but I’ve been better lately. Thinking about tight spaces or watching someone get caught in one, like Ryan Reynolds in Buried or James Franco in 127 Hours no longer freaks me out. It was a strange three years, though.

Before the lemon squeezer, I never truly understood what all the claustrophobic fuss was about. I get it now. I’m not sure if I’m fully over it, but I’d like to put it to the test. Maybe it’s time to head back over to the Lost River Gorge and see if I can make it through the lemon squeezer this time. What do you think? Well I managed to write that without hyperventilating, so maybe I really am better. One thing’s for sure, now that I know what it’s like; you’ll be reading about some claustrophobic situations in stories of mine sometime in the future. And if I’m any good, you’ll know what it’s like to be caught in a tiny space, unable to move, heartbeat accelerating, hyperventilating, eyes darting uncontrollably this way and that, adrenaline coursing through your veins and making you struggle more, lodging you even tighter into your narrow little prison from which you’ll never escape.