I am a well-educated, fairly dignified woman. I read Faulkner and Hemingway and have studied the morphological and chemical variations of the common dandelion. And, as anyone who has ever been to a convention with me can tell you, I totally geek out when it comes to meeting former wrestlers.

For me, wrestling is a fond childhood memory, dating back to the time when my father would take my sister and me to the Glastonbury High School gym to watch Bob Backlund wrestle Ray “The Crippler” Stevens. There’s a special love there, one that nobody likes to talk about, but is recognizable in other wrestling fans when they let slip that yes, they have always wondered how George “The Animal” Steele got his tongue so green. (The answer: spearmint Chiclets, which I learned after meeting him at the Southcoast Toy and Comic Show.)

At Rhode Island ComicCon, I had the pleasure of meeting Jake “The Snake” Roberts and “Hacksaw” Jim Duggan. For those of you who don’t know who these men are, you’ve probably already given up on this article anyway, so I don’t feel I need to explain.

Wrestling superstar Jake “The Snake” Roberts stated in casual conversation that he’s feeling great, is drug free, and recently lost 40 lbs. He’s an advocate of DDP Yoga (www.ddpyoga.com) and highly recommends the workout and meal portions that the program teaches. He was animated and enthusiastic when talking, and it was wonderful to see Roberts looking and feeling well. 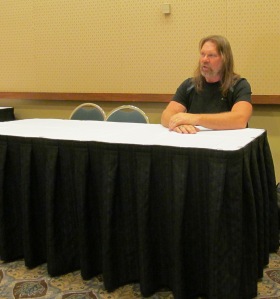 The wrestling panel that was scheduled for Sunday afternoon turned in to a Q & A session with WWE Hall of Famer “Hacksaw” Jim Duggan. (Originally, the panel was to include Roberts and wrestler Big Van Vader, but Roberts had to leave early to catch a flight, and Vader was a no-show.) Duggan has been wrestling for 33 years, and his love of the business was evident in his enthusiasm and the beaming smile he wore while talking about his career. He was friendly and articulate, occasionally breaking out into his Hacksaw persona to emphasize a point. Duggan patiently answered questions about his former employers (both the WWE, which Duggan states “is run like a corporation, which it should be, because it is one” and the WCW, which he recalled as “the inmates running the asylum.”) He spoke about former coworkers Andre the Giant (“he was a lonely man”) and Hulk Hogan (“he’s a real good guy”) with fondness. As with any employee at a company, he didn’t always get along with the people he worked with, but was a gentleman when former opponents he didn’t care for came up. “We aren’t close,” he would explain if someone asked him about a specific wrestler he didn’t get along with, and would deftly move on to the next question.

Duggan’s achievements in the ring include winning the first (then-WWF) Royal Rumble in 1988 and WCW Television Champion and United States Heavyweight Champion. He named his 2011 WWE Hall of Fame induction as one of his proudest achievements. When asked about the 1997 “Montreal Screw Job” (in which WWE Champion Bret Hart was asked to drop the belt to Shawn Michaels prior to Hart’s exit to WCW, which Hart refused to do; WWE owner Vince McMahon called for the bell early even though Hart hadn’t submitted, ending the match) Duggan surprised the audience. “I actually think Bret was wrong,” he admitted. “If the boss tells you to drop the belt, you drop the belt.” Hart hadn’t wanted to lose in Canada, his home country. “I don’t want to lose in America,” Duggan laughed. “But you do it because the boss tells you to.” Duggan and Hart have spoken about the incident and remain friends. Duggan is also close to “Rowdy” Roddy Piper and Hogan. 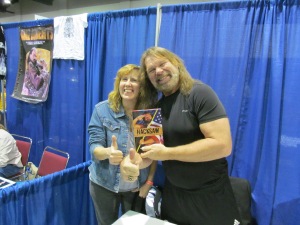 Duggan ended the hour-long session by allowing fans to get their picture taken with him, a big-hearted gesture considering other celebrities were getting $10 to $20 on the convention floor for photos. Meeting both Roberts and Duggan was a thrill for this particular wrestling nerd, and the highlight of my weekend.

Side note: I was able to meet Big Van Vader briefly at this event as well. We aren’t close.