And don’t miss the 60+ minutes of in-depth bonus features that take viewers behind the battle lines with their favorite Super Heroes!

Marvel’s Captain America: Civil War has conquered both audiences and critics, debuting to $179.1 million—the fifth-biggest domestic opening of all time—and earning a 90% critics rating on Rotten Tomatoes. Captain America: Civil War is the highest-grossing film of 2016 domestically, internationally and globally, earning more than $1.14 billion at the worldwide box office. It also continues Marvel Studios’ winning streak as the 13th consecutive film from the Marvel Cinematic Universe (MCU) to debut at #1 at the domestic box office.

More than 60-minutes of thrilling, exclusive bonus material includes: an inside look at the evolution of lead characters Steve Rogers and Tony Stark, a behind-the-scenes exclusive on the making of Marvel’s Captain America: Civil War, never-before-seen deleted scenes and hilarious outtakes. Plus, home audiences can learn more about the latest additions to the MCU and get an exclusive, first look at Marvel’s Doctor Strange, starring Benedict Cumberbatch, coming to theaters Nov. 4, 2016.

· United We Stand, Divided We Fall – The Making of Captain America: Civil War Part 1 & Part 2 – As the tension mounts, sides are chosen and lines drawn. Learn more about the characters on each side—from Captain America and Iron Man to the latest recruits. In this complete behind-the-scenes look at a landmark in the Marvel saga, we’ll examine their stories through exclusive footage and interviews and discover just what went into selecting the Super Hero teams, filming the epic action sequences and introducing Black Panther and Spider-Man to the MCU.

· Iron Man: The Road to Civil War – From Gulmira to Sokovia, delve into the development and evolution of one of the most iconic characters in the Marvel Cinematic Universe.

· Gag Reel – Break the tension of this high-stakes conflict with some hilarious outtakes featuring the lighter side of your favorite Super Heroes.

*Bonus features may vary by retailer. The DVD does not include any bonus materials.

The most explosive clash to ever rock the Marvel Cinematic Universe ignites a firestorm of conflict in the game-changing epic, Captain America: Civil War. In the wake of collateral damage, government pressure to rein in the Avengers drives a deep wedge between Captain America (Chris Evans) and Iron Man (Robert Downey Jr.), causing a catastrophic rift that escalates into an all-out feud. Against a backdrop of divided loyalties, their fellow Avengers must deal with the fallout. Pick a side in this spectacular adventure, packed with mind-blowing action, suspense and exclusive bonus content!

Actor and Director Talk about Their New Film by Jason Harris

Actor Zachary Quinto (2009’s Star Trek, Heroes) started his production company, Before the Door, in 2008 and its first film, Margin Call, is being released Friday. 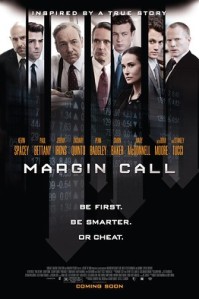 The film is a thriller entangling the key players at an investment firm during one perilous 24-hour period in the early stages of the 2008 financial crisis. Entry-level analyst, Quinto’s Peter Sullivan unlocks information that could prove to be the downfall of the firm; a roller-coaster ride ensues as decisions both financial and moral catapult the lives of all involved to the brink of disaster.

Quinto said the script was “fantastic.” He also liked how the film “handled the subject matter.”

“I liked how it drew me in,” Quinto said. “I thought it was really compelling material.”

Margin Callis written and directed by J.C. Chandor, his first feature film. He doesn’t know if the timing of the film’s release during the Occupy Wall Street movement will help the film’s marketing efforts. 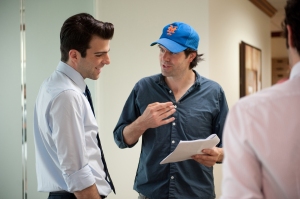 Zachary Quinto and J.C. Chandor on the set of Margin Call

“It’s certainly rewarding,” Chandor said. “It takes many years to make a film. To be able to introduce a film into that environment is very rewarding.”

“It’s very inspiring that people are actually out in the street having their opinions heard,” Chandor said.

Chandor said he will have to wait and see if the movement helps the film at the box office.

Chandor doesn’t think it will be a challenge marketing a film about an unsympathetic company taking advantage of people.

“You don’t have to like everyone in the movie,” Chandor said. This is about coming into a world where you really aren’t supposed to like everyone in it. Every character is human. In the same way a horror movie can be entertaining and fun, you are with these people in their every day professional lives. You see it from a different point of view.”

Chandor mentioned two reasons for people to see the film.

“I would say a reason to see Margin Call is hopefully it entertains you for an hour and a half,” Chandor said. “We tried
to make a compelling drama. The second thing is we tried to do is give the viewer insight into a world they are not normally privy; a world not normally available to them.”

“The cast was an unbelievably great surprise,” Chandor said. “These actors really believed in the project. It made it that much more rewarding.”

Chandor said the 17 day shoot helped the film land actors with very busy schedules. The shooting schedule was “very short in the world of filmmaking,” he said.

The performances turned in by Spacey and Irons were everything Chandor could dream of as a writer and director, he said.

“It was actually a bit of a risk at the time to cast Kevin in a role that is essentially for much of the film supposed to be quite empathetic with the audience,” Chandor said. “In the past, it might have been more typical to cast him as the CEO.”

Chandor said Spacey inhabited the character and made it his own. 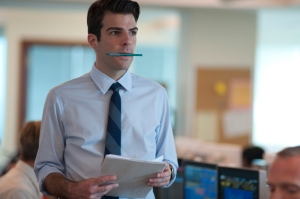 Quinto in a scene in Margin Call

Quinto prepared for his role by shadowing some Wall Street workers at Citibank.

“The Citibank workers were really supportive and really available,” Quinto said. “They were able to help myself and the other actors.”

Chandor had several incidents in late 2006 through 2008 that inspired him to write Margin Call, which he started writing
three years ago, he said.

The movie will be available in theaters and on video on demand. Check out the film’s website, http://margincallmovie.com/
for the theaters showing the film.