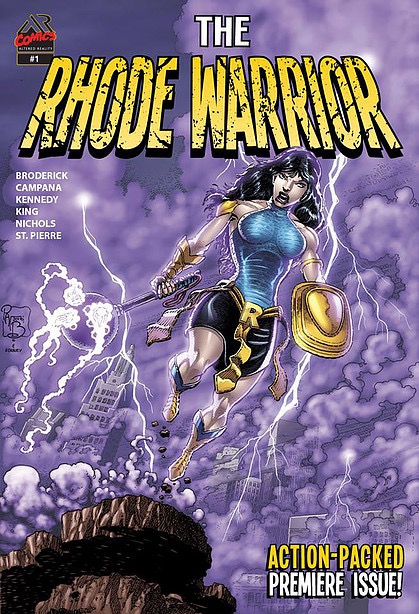 In Issue #1, a vile new menace has brought his evil plans to Providence, which threatens the safety of the entire city and all its citizens! Local authorities have only one person to turn to—The Rhode Warrior. In a world filled with super-powered beings and villains of all types, she is Rhode Island’s new defender.

The Rhode Warrior’s adventures are all-ages superhero stories which take place in Providence and the surrounding areas. The Rhode Warrior is a tough character with a strong sense of right and wrong. She is meant to embody the personality, strength, and resilience of the people of Rhode Island & New England.

“Steve (Perry) and the rest of Altered Reality Entertainment have given us an opportunity, and we are doing everything we can to deliver something new and exciting to the fans attending Rhode Island Comic Con. The Rhode Warrior has work by phenomenal creators that I grew up reading. Seeing them bring a superhero to Rhode Island is really something else,” commented the book’s co-creator, Ian Chase Nichols.

Ian Chase Nichols has worked on multiple Teenage Mutant Ninja Turtles series for IDW, Imaginary Drugs (IDW), The Tick (NEC) and numerous other independent comics, books, and newspapers. He is also a graphic and web designer. He has been the lead designer for numerous award-winning books.

Coinciding with the release of Captain America: Civil War, Rhode Island Comic Con, the Biggest Show in the Smallest State, for their 5th year anniversary has announced its latest guest — Anthony Mackie.

Mackie is best known for his role as the Falcon in Captain America: Winter Soldier, Avengers: Age of Ultron, and Ant-Man, however he has also been featured in recent films such as The Night Before, Love the Coopers, Playing It Cool, and Triple Nine. Mackie will be greeting fans, and offering photo and autograph opportunities.

Available through Ticketmaster and the Dunkin Donuts Center Box Office, Rhode Island Comic Con ticket prices are as follows: a 3-day pass to the show running November 11th through the 13th is $75 for adults and $30 for kids between the ages of 6 and 12. Daily admission is also available, as well as a VIP admission for $139. Attendees are strongly encouraged to buy their tickets in advance. For more information, visit the event’s website at www.ricomiccon.com.

Available through Ticketmaster and the Dunkin Donuts Center Box Office, ticket prices are as follows: a 3-day pass to the show running November 11 through 13 is $75 for adults and $30 for kids between the ages of 6 and 12. Daily admission is $30 for Friday, $45 for Saturday, and $40 for Sunday. Daily admission for kids is also available, as well as a VIP admission for $139. Attendees are strongly encouraged to buy their tickets in advance.

Rhode Island Comic Con is held at the Rhode Island Convention Center and the Dunkin Donuts Center. Preliminary guests announced include Kristin Bauer from Once Upon a Time and True Blood, and comic book artist legends Kevin Eastman and Neal Adams. More guests are slated to be announced as the year progresses. For more information, visit the event’s website at www.ricomiccon.com.

WWE superstar Kane was on hand at TerrorCon at the Rhode Island Convention Center on Sunday, June 8 to meet fans and participate in a Q & A session with a packed crowd in attendance. Glenn Jacobs, who is the man behind Kane’s mask, was friendly, personable, and humble as he answered questions from the audience.

The first question from the moderator was about a failed character from Jacobs’s past, the ill-fated Isaac Yankem, DDS. Notorious for not liking to discuss this past gimmick, Jacobs did admit that he felt the personality’s failure was “mostly my fault. I didn’t like [the character], and it showed.” Jacobs was next asked who his favorite opponents have been over the years. His response listed some of the most well-known faces in wrestling from the past two decades, including The Undertaker, Mick Foley, Stone Cold Steve Austin, and Shawn Michaels.

One fan in the audience asked Jacobs about his reputation in the wrestling locker room as one of the “safest” opponents to face. Jacobs shrugged and explained “it’s mostly just about being a professional. You want to stay safe and keep your opponent safe.”

Jacobs was asked to reflect on his character’s evolution over the past 17 years. “Most guys go out to the ring doing the same thing night after night,” he said with a smile. “Kane’s different. He’s been able to evolve and develop as a character. I think it keeps him interesting.” He recalled different phases of Kane’s career, including a time when Kane had to use a voice box to communicate and when the Big Red Machine’s mask first came off. “It was hot under that mask,” he admitted. When asked who made the decision to unmask Kane, Jacobs said “two people: me and Vince [McMahon, WWE CEO].”

Jacobs fielded the questions from fans with good humor and grace. When one audience member asked him to comment on a current storyline about the Shield and Evolution, a storyline Kane is not involved in, he responded kindly: “I think it was a surprise, and that’s what you want, right?” Another fan asked about Kane’s experience getting Pete Rose in a Tombstone pile driver at WrestleMania 14 in 1998. “Pete Rose is like us,” Jacobs laughed. “He doesn’t take himself too seriously. I was just surprised when the crowd started cheering me.”

After the Q & A session, fans lingered to shake Jacobs’s hand and thank him for the opportunity to talk to him. “The best part about this business is you guys, the fans,” Jacobs said humbly, which is yet more evidence showing why Kane continues to be a fan favorite among wrestling patrons of all ages. 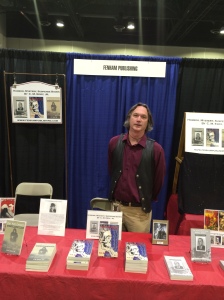 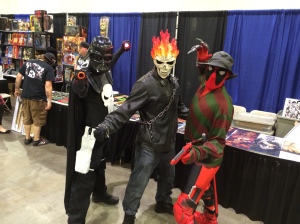 Me and Kane Hodder. 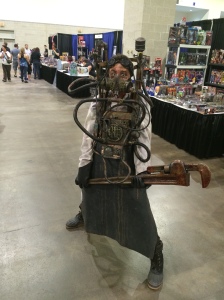 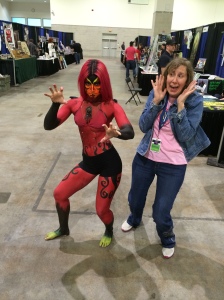 Author Stacey Longo having a scream at Terror Con.

A scorpion at Terror Con.

There will be one more entry with pictures from Terror Con tomorrow. 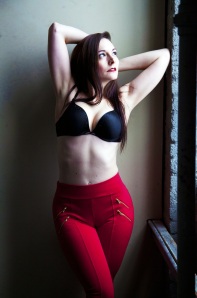 Sarah Michelle is a model, actress, and wrestler. She has also been named Miss Terror Con. When she first heard about the newest horror convention in New England, it was as “a fan of horror,” she said.

“I was very excited that there was something like this going to happen in my hometown because it’s the first one,” Sarah said. “This is exactly what Rhode Island needs.”

She wanted to be involve in some capacity whether as a spokesmodel, helping out with flyers, or anything else she could do to help out the horror convention.

“I knew I could be beneficial to them.”

She sent the organizers an email and they responded with the idea of Miss Terror Con.

This isn’t Sarah’s first time in the spotlight. She started modeling about seven years ago when she was helping out a friend who was going to school for photography.

“I was really tomboyish. I still am at heart so the whole fashion, glamour thing was really new to me.”

After Sarah started her modeling career, she liked what she doing and was having fun doing it. Within the last few years, she started taking it seriously, she said. Since she loved horror, she started to wonder if there was anyone who would be interested in taking horror photos.

“I found out that there were a lot of people interested in that.”

Through her horror work, she started doing fetish work. When she started, she didn’t realize it was fetish work. She was working with the production company, Damsels in Distress Visual Productions. During the production, there were a lot of close-ups being taken of her legs, which were stuck in the mud. All she was thinking at the time was that it was a job and that it would give her a chance to practice her acting. After being told it was a fetish work, she was fine with it.

“I have always been very curious about different fetishes and things like that.”

After that first experience, she found out about different types of fetishes like bondage and vore, “which is essentially someone being eaten by something.”

She focuses mainly on fetish and horror photos and videos now. She handles her own business. She gets projects through Facebook, Twitter, and email. She has a shoot coming up in New Hampshire, which she got after the photographer saw some of her work on Twitter, she said.

Her work has taken to different states and overseas to England where she filmed a quicksand fetish for Damsels in Distress Visual Productions.

“I never thought in a million years I would be going to England especially not for fetish work.”

You can find Sarah’s work by clicking here.