Welcome to my second post of pictures from Super Megafest took place back in October at the Royal Plaza Trade Convention Center in Marlborough, MA. 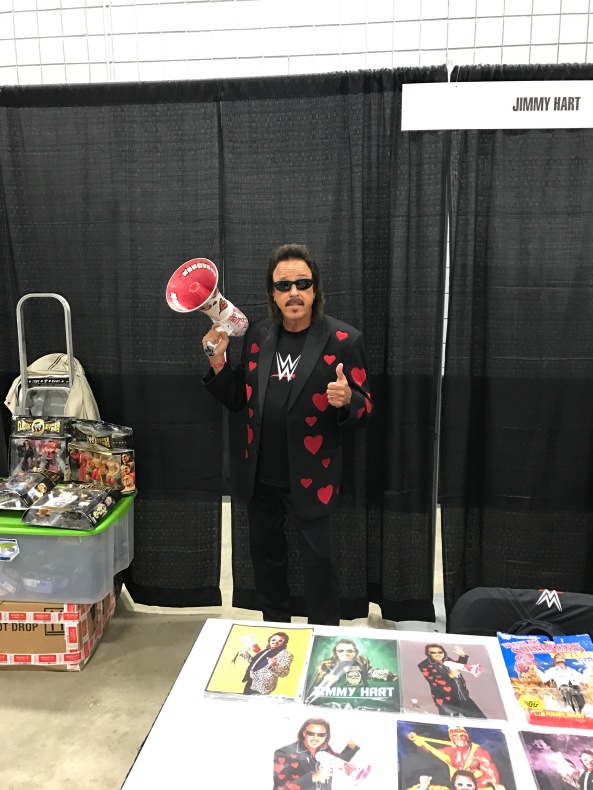 The Mouth of the South Jimmy Hart.

Queen of the Paranormal Kadrolsha Ona. 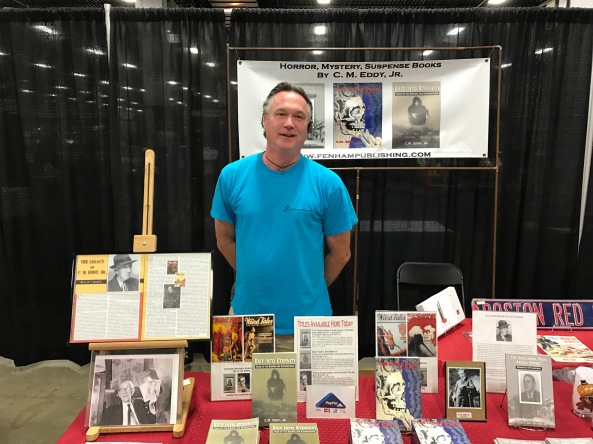 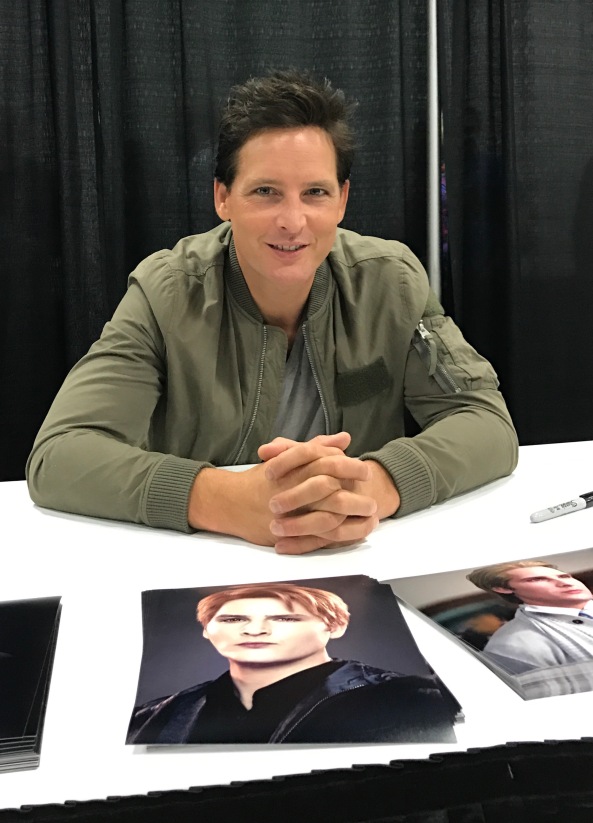 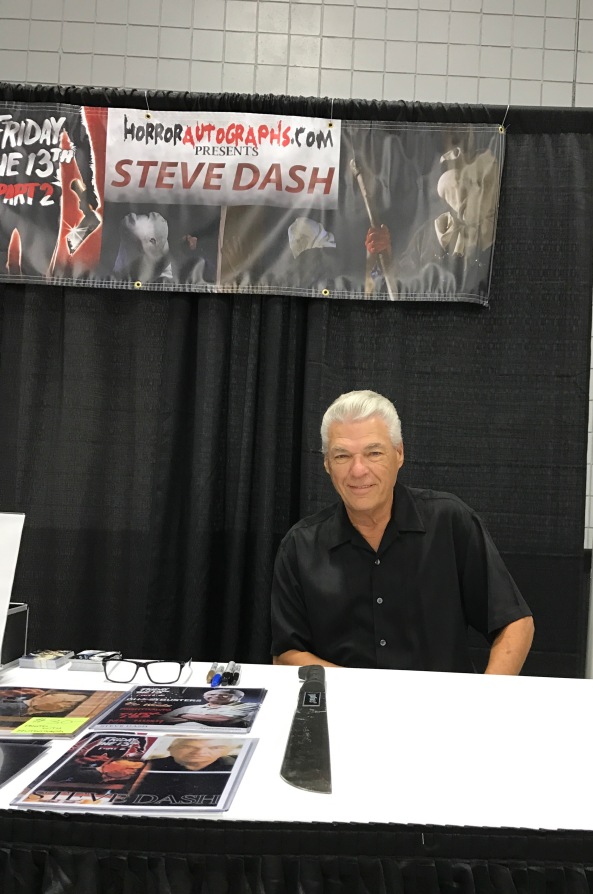 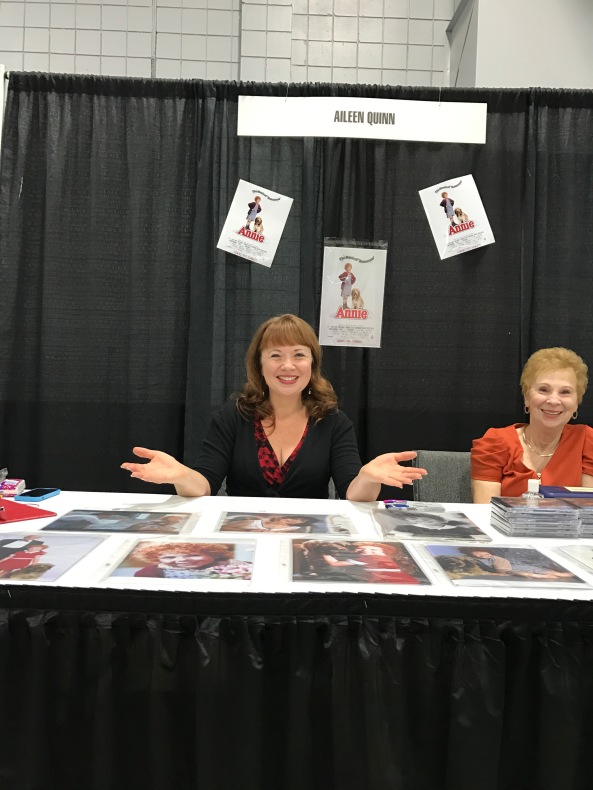 Aileen Quinn (Annie) with her mom. 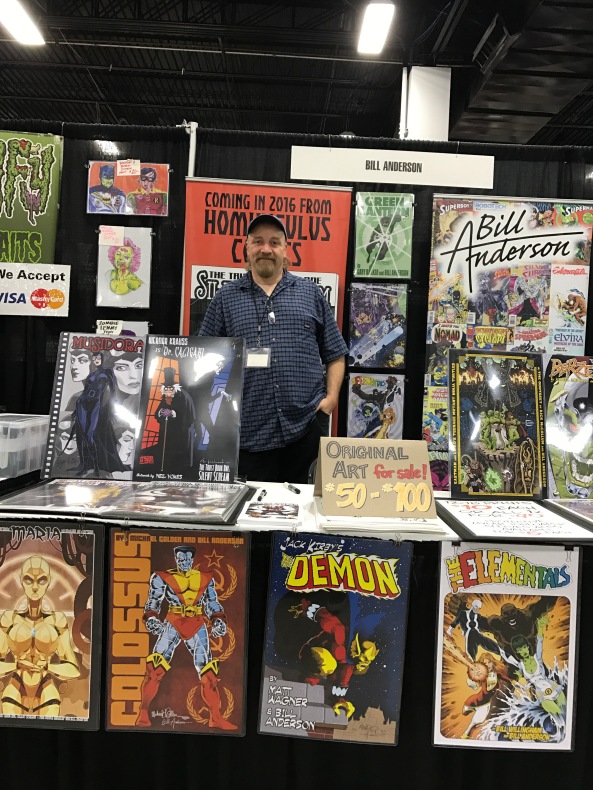 Deathstroke and Sandra Taylor (Under Siege 2). 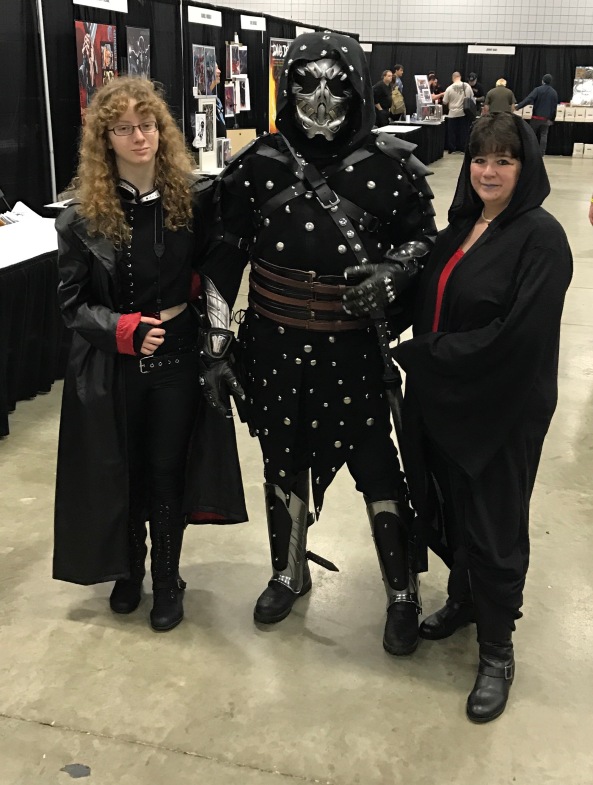 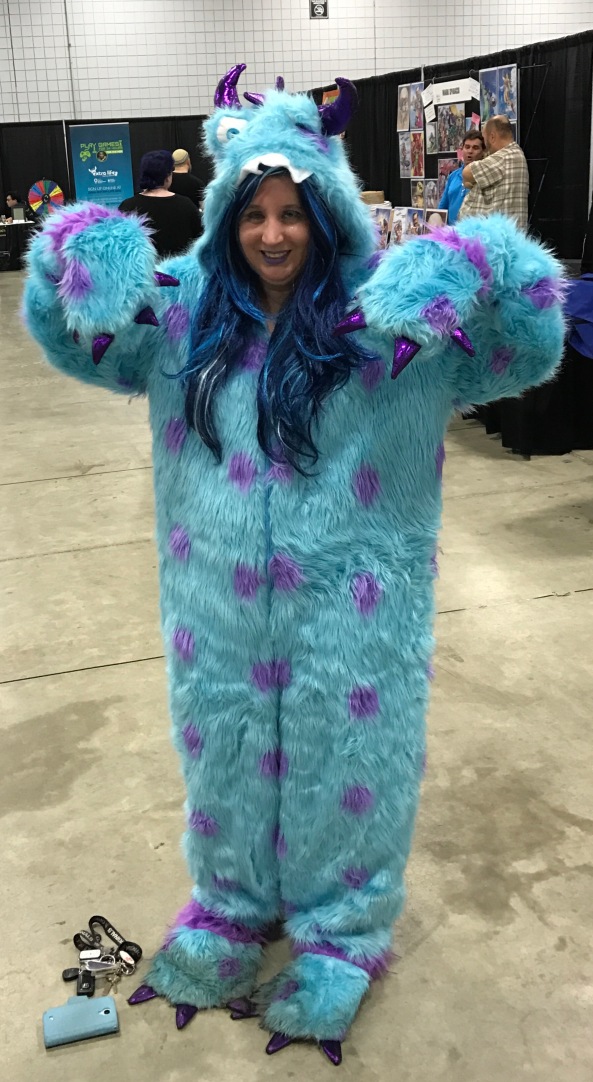 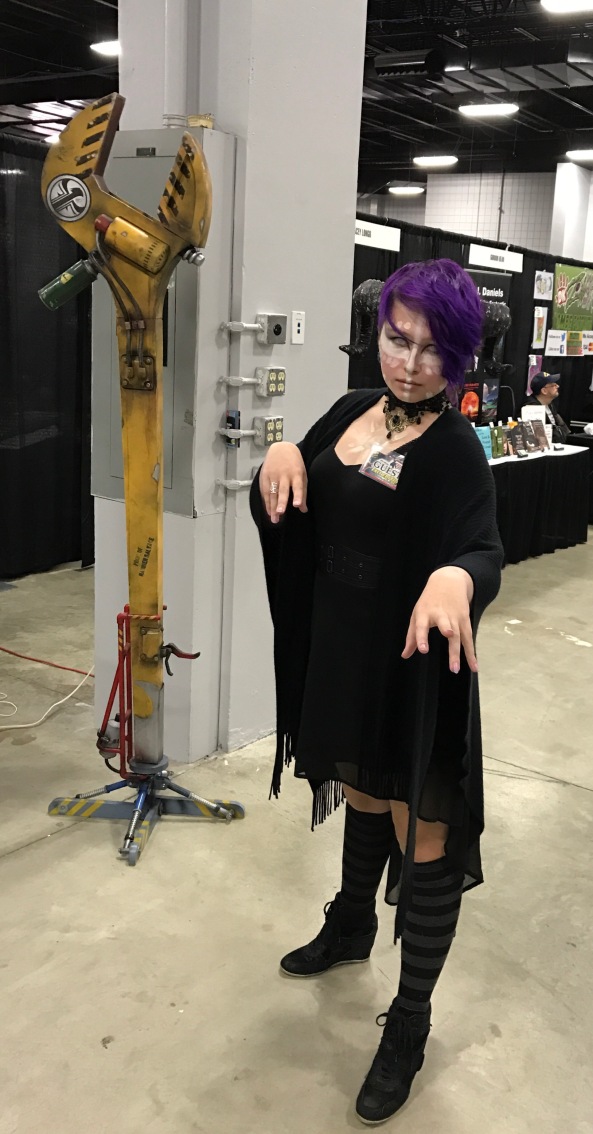 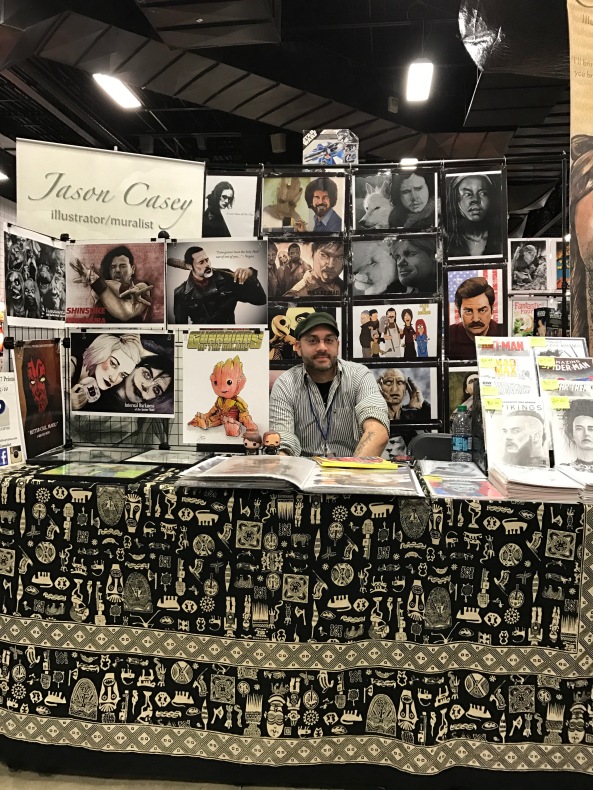 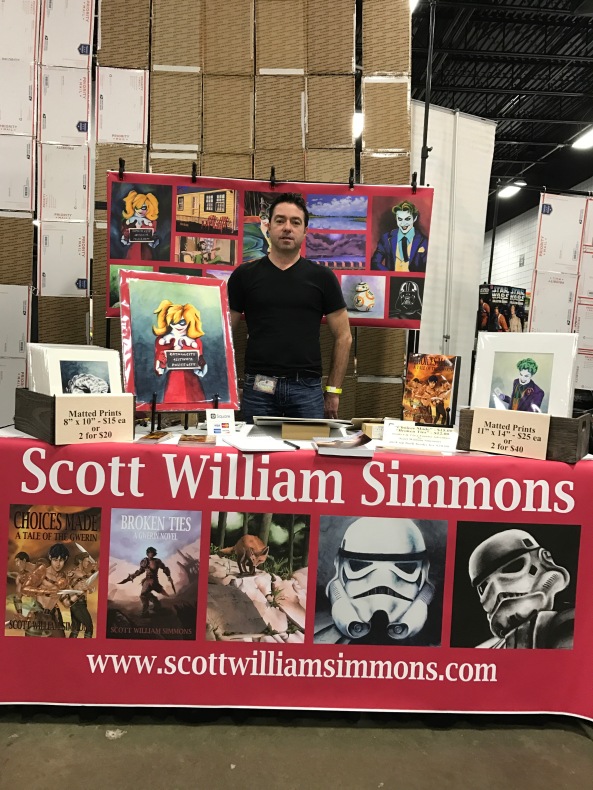 Georgina Morales started writing when she was nine.

“I wrote poems in Spanish, mostly, and never thought I was any good. I got busy building a career in medicine and forgot about writing for 15 years. After some insistence from my husband, I started writing fiction 4 years ago, and I’ve never been happier.”

Since she started writing fiction, Morales has published a horror novella, Perpetual Night, which has been described as YA even though the subject matter may be a bit dark. She has also written, “Francis,” a short story published in the horror anthology, Isolation. Her most recent published work, “Broken Promises,” appears this month in Heater magazine. It’s her first endeavor into crime/mystery writing, which she finds exciting.

Morales’ not resting on her laurels, but instead is working on two short stories at the moment. The first one, “Tamam Shud,” is a noir mystery scheduled to be part of the anthology, Lucky 13, which will be published by Padwolf Publishing. It’s about an old man who becomes disenchanted with life after the death of his wife, and his kids pay the price.

There is an unnamed horror story Morales is working on for a themed anthology that she won’t name so as not to jinx it, she said.

She is also working on a paranormal mystery, Deliverance. “I’ve been working on it for some time now, but it is still far from completed, thanks to my recent commitments to write other pieces.”

Morales is grateful for the commitments, even though they have kept her from working on her mystery.

She does have a few habits when she starts writing.

“I usually sit at my desk in my office about 10 or 11 a.m., I answer emails and play—I mean, promote—on Facebook for about an hour, and from then on, I’m a mean writing machine.”

She stops around 3 or 4 p.m. so she can go pick up her girls from school. She tries to stick with this schedule because she finds that without specific goals she’s less productive. The use of sticky notes reminds her of these goals, she said.

Morales belongs to a critique group and must post at least 1500 words every Sunday, which is what keeps her “ass in line” and “very productive.”

“Deadlines are gold for me.”

The best advice she has received covers writing and editing.

“Don’t edit while you write or you’ll never move forward. When you write, write. When you edit, edit. I don’t remember where I read that but it speaks to the quintessential need of a writer. We want our words to be gold from the moment we set them on paper. If the sentence is not perfect, if the feeling is absent, if the atmosphere is not exactly what we envision, we don’t move forward. We tend to correct ourselves every second, but the truth is that all first manuscripts are shit.”

She doesn’t use the word “shit” for shock value, but that first manuscripts are that, Morales said. “This is why writers edit and edit.”

As writers should, Morales reads whenever she isn’t writing or taking care of her family.

“I read a lot of horror and try to read at least a couple of new or modern voices in the genre every other month.”

For the last year, she’s been focusing on the true classics of horror, but not Bram Stoker or Mary Shelley. She’s been reading Joseph Sheridan Le Fanu, Daphne Du Maurier, Algernon Blackwood, and Thomas Ligotti.

Morales hates procedurals and isn’t quite a fantasy girl, but is trying the Harry Potter series. She isn’t above the Twilight books, but not the movies, she said.

“I grew up reading Edgar Allan Poe and Stephen King, so you will see a lot of their influence in my stories. However, I love Latin American literature. I strive to achieve a personal style similar to the poetic prose of Gabriel Garcia Marquez, or the bluntness of Paz, the yearning of Federica Garcia Lorca. All of these great voices have formed me, and that is why my style is different from other horror writers. Or at least, it will be; one never stops to improve.”

She doesn’t have any promotional events coming up, but is working to change that. Until that happens, visit her blog, her Goodreads page, her Facebook page, or her Amazon page.

The Trouble with Genres

Genre is truly a tricky thing. This all-important label helps not only to identify a novel but also the book’s intended audience. Without it, a book and its author could suffer a serious identity crisis. And, it was honestly one of the aspects of marketing my book that I struggled with the most. I’d written the entire first draft without much thought to its specific genre. Then, when left with the task of pigeonholing it, I ungracefully stumbled into calling it paranormal fiction. At my first fiction conference, I was told under no uncertain terms was it paranormal fiction. I often wonder how educated that assessment was coming from a distracted literary agent who half listened to my one-minute pitch. Nevertheless, she said paranormal fiction immediately brings to mind the genre’s sister, paranormal romance, and unless it was heavy on the romance, I was better off calling it urban fantasy. From then on, that was my book’s label.

However, a label can make an enormous impact on a book. Suddenly, my fiction novel, written before it was categorized, had an already established audience and with it a collection of expectations. Janice Hardy’s post addresses these expectations: “What readers expect. Fantasy is all about other worlds that can’t exist, mixed with magic, mysticism, or supernatural elements. These are the  defining characteristics of the fantasy genre. Just like spy thrillers  have their own characteristics and reader expectation. There were  aspects of the spy thriller I wanted to incorporate into my fantasy  story, but at its heart, it’s all about the magic and the fantastical world. When a reader picks up a book in a genre, they want certain traits.  Picture your favorite band. Now imagine going to their concert and hearing them play a totally different type of music. Country instead of  rock, rap instead of jazz. Even if you like the new type of music, odds are you’d be pretty unhappy at the bait and switch. Genre helps readers find the types of books they want to read. It also helps bookstores know where to shelve books, and what to suggest to their customers. Ditto for libraries.”

The publishing industry considered it a hot but overly saturated market. Readers had one of three reactions: strong interest (because they were long-time fans), rejection (usually due to thinking it was bloody, scary, or too steeped in fantasy), or confusion (typically a result of never having heard the term urban fantasy). The first group continued to ask questions about the plot and setting, all the while growing more and more interested. For the middle group, I would typically explain that it was bloody without being gory, suspenseful rather than frightening, and a fantasy set in our contemporary world. And, for the latter group, I stupidly found myself eloquently explaining the term urban fantasy and its roots instead of explaining my book, which didn’t necessarily fit neatly into the category. I did that only a few times. However, people still have preconceived notions about it based on the label. I have fielded questions, such as “Does it have vampires?” (no), “Is it like Twilight?” (um, big no on that one). “Will my teenager like it?” (absolutely), “Will adults like it?” (yes, more than the teenagers).

Essentially, the genre label, meant to be helpful to the publishing industry, has proven confusing to the readers. Some expect it to fit nicely on the bookshelf next to other urban fantasies where a barely clothed, well-endowed woman with a steely expression sits splay-legged in a graveyard. No offense to the character on that book cover, but when my Gabrielle Gayle sets out to demolish were-witches, she does so with all her parts covered and protected. She’s beautiful and sexy, but she will leave the lipstick at home in favor of packing her daggers. But, I have accidentally found myself on my soapbox about the over sexualization of female heroes in fantasy. Back to my point, for months, I trolled the aisles of bookstores and pulled countless titles off the shelves falling under the urban fantasy umbrella, lined them up to look at their covers, and asked myself how, and even if, my novel fit in with these. It does, mostly, but it also fit in with other books, novels that are a part of another sub-genre, dark fantasy. Dark fantasy has closer ties to horror than urban fantasy does, and poor horror has its own battles to fight when it comes to audience presumptions. After only a few months as a member of the New England Horror Writers, I have already been to some events where audience reaction was either excitement or blunt rejection. At least people know what it is to be classified as horror, for the most part. But, horror seems to be even more polarizing than fantasy. People either can’t get enough of it or steer clear of it, buying the books for that odd friend or family member who likes “that kind of stuff.”

With more and more novels being ones that cross genres, affixing a book with one specific genre label seems to be more troublesome than clarifying. Publishing companies can’t get by without the hard and fast categories and will at times allow new ones to spring up because every book simply must have a place. They revel in the preconceived notions held by audiences because it makes marketing that much easier.

But, what about the writer?

What happens to the unpublished writer spending thousands of dollars on fiction conferences who hears time and again that one particular element, while brilliant, simply isn’t found in that specific genre? One writer could hear from an agent that his or her science fiction book has too much science and not enough character while another agent could tell him science fiction is supposed to be more about the concept and less about the characters, all based on expectations of the genre. What’s to keep that writer from hacking at his or her work removing the book’s most poignant and well-crafted pages only to replace them with elements that, for no better reason, exist simply because they fit better in the genre? How much should a writer mold the book to fit the genre? Shouldn’t it be the other way around? After all, books are created by writers while genres are made by publishing companies to classify books?

Another issue is that there are likely too many genres for readers and writers to be aware of them all. Below is a genre map from Book Country. Notice that dark fantasy isn’t included? That’s because it’s only recently been recognized as its own sub-genre.

And, there’s no fixed formula or set of criteria for a book to meet before it’s labeled. And, an additional side effect of genres is that they often don’t settle with just the book. The labels attach themselves to the writer as well, like mold. Novelists aren’t simply writers once they’ve written a genre book.  They’re fantasy writers, mystery writers, romance writers, etc, leaving one to wonder the following:

Do writers themselves also conform to a specific genre to satisfy expectations of the audience and the industry? And, what does this mean for writing as a craft?