Pictures from the First Day of Necon 32

The trip to the Northeastern Writers’ Conference (Necon) took a stop in Bellingham, MA. at the Friendly Neighborhood Comics. It wasn’t a stop for comic books, but a few collections of Batman comics were bought. The stop was made to meet the store’s owner, Ernie Pelletier, Jr. and to look over the store since there will be an Epitaphs signing on Saturday, Oct. 6.

A group of Necon campers waiting for a table at Scampi’s. 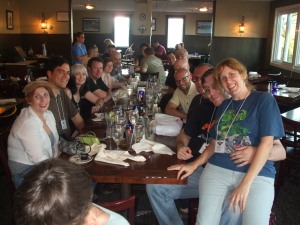 A portrait of the late Les Daniels, who died last November, done by Artist Cortney Skinner.

Part of the NEHW tables at Necon. 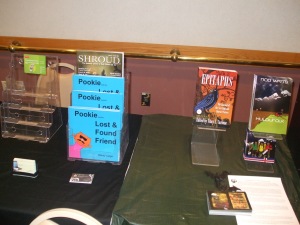 Another part of the NEHW table.

A group of NEHW members’ books.

3 comments on “Pictures from the First Day of Necon 32”