I’m not ashamed to admit I’ve watched the new Dallas series. In fact, I got a sneak peek of the first seven episodes and wrote a review of the show (read it here!) See, my sister made me watch the old Dallas when I was about nine years old, and she must have made me keep watching it up until I was 18 and it went off the air. Seeing my old friends Bobby, Lucy, Ray, Sue Ellen, and J.R. on the new show made me realize how much I’ve missed them. So many of the life lessons I abide by today came from watching Dallas. For instance …

1. If you’re going to shoot someone, make sure they’re dead when you’re finished.

2. Sure, you can use your pretty face to marry money, but deep down, you’ll always be Digger Barnes’s daughter.

3. That little old lady may look sweet, but you don’t know if she’s bludgeoned her husband to death with a frozen leg of lamb, then cooked it up and served it to the police investigating the crime. (Wait. That might be a life lesson from Alfred Hitchcock.)

4. Don’t sleep with the hired help. That hot ranch hand might turn out to be your uncle.

5. It’s probably not a good idea to start getting drunk at 8 AM. But since I’m not married to J.R. Ewing, who am I to judge?

6. Sometimes, when you think your life has turned to crap, it actually all turns out to be a bad dream.

So take it from me: tune in to the latest antics of J.R., Bobby, and Sue Ellen. You just might learn something useful!

Life lesson number seven: there’s something to be said for keeping up with your eyebrow plucking.

TNT is bringing Dallas back to viewers June 13. The original series, which enjoyed a 14-year run, still maintains a legion of fans, which may be why TNT decided to bring the residents of Southfork ranch back to television. The new series sets up a rivalry between a new generation of Ewings—J.R.’s son, John Ross (John Henderson) and Bobby’s adopted son, Christopher (Jesse Metcalfe).

Back to embrace the roles that made them household names, Larry Hagman and Patrick Duffy are back as brothers J.R. and Bobby Ewing, still fighting for control of Miss Ellie’s ranch. Other original cast members include Linda Gray as Sue Ellen, J.R.’s ex-wife and now a candidate for governor; Charlene Tilton as Lucy, offering advice to her cousin John Ross; and Ken Kercheval as the still-vindictive Cliff Barnes.

The series, however, focuses on John Ross and Christopher, who both have very different plans for Southfork—John Ross wants to drill for oil, while Christopher dreams of using proceeds from the ranch to fund his alternative energy research. But getting in the way of both men’s ambitions are their fathers.

True to character, Bobby is still struggling to do the right thing in the face of adversity. And J.R. is still as deliciously devious as ever, not caring who he screws over to gain control of Southfork once and for all. One of the highlights of the new series is watching J.R. vow to his brother that he has turned over a new leaf, while backstabbing everyone around him behind the scenes. Larry Hagman is as formidable as ever, showing why J.R. Ewing’s name is known even to those who never watched the original show. Patrick Duffy slips in to the role of Bobby with easy familiarity, and while we are told Pamela Ewing “disappeared” years ago, Brenda Strong fills her shoes as Ann, Bobby’s new, but equally supportive and loyal, wife.

Fans of the original series will delight in seeing familiar faces (not all of whom are mentioned here,) as well as the winks throughout to the original show. (When Bobby’s wife Ann points a gun at J.R., he purrs “Bullets don’t seem to have an effect on me, darlin’.”) Plus, it’s fun to see little John Ross and Christopher all grown up, engaged in their own power struggle.

For those who never watched the original series, the dynamic trio of J.R., Bobby, and Sue Ellen, as well as the love triangle between John Ross, Christopher, and Elena (Jordana Brewster) will hook them quickly. Throw in a wife for Christopher (Rebecca, portrayed by Julie Gonzalo) and a bid for Southfork by Cliff Barnes, and you have a version of Dallas that’s sure to please.

Tune in to TNT tonight from 9-11 p.m. to watch the premiere of Dallas.

To read an article with two of the cast members, click here. 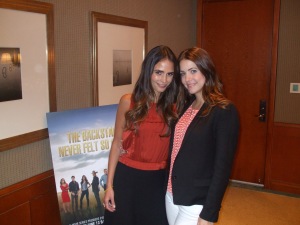 Dallas is set to return to television Wednesday night for a new generation to learn about the Ewing clan.

Jordana Brewster (The Fast and the Furious) and Julie Gonzalo (television series Veronica Mars), two of the stars of the new series, recently came to Boston to promote the show.

Gonzalo said they were excited about the new series and shooting at Southfork.

“I don’t think it has set in that it’s such a big deal until now when the shows about to roll out,” Gonzalo said.

The original Dallas debuted in 1978 as a five-part mini-series and ran for fourteen seasons until 1991 on CBS.

Brewster and Gonzalo didn’t watch the original series until they got the job in the new one, they said. They have watched three seasons so far.

“We weren’t born when it came out,” Gonzalo said about the original Dallas.

They weren’t born until the third and fourth seasons came out. Brewster was born in 1980 and Gonzalo in 1981. Another obstacle to watching the show was the fact that they weren’t living in the United States.

“I grew up in a different country until 1990,” Gonzalo said.

Gonzalo and Brewster were living in Argentina and Brazil respectively.

The “beauty of the show” is the fact that you can see where these characters are 30 years later, which “no other show has ever done,” Gonzalo said.

The new show gives people a chance to see how the Ewings’ children turned out, Brewster said.

“Cynthia [Cidre] wrote an amazing script with great, well-crafted characters and many, many twists and turns so it was heavily plotted … ,” Brewster said.

Audiences will see for themselves tomorrow night at 9 p.m. on TNT. The first season has ten episodes. The pilot was shot in April 2011 while the rest of the season was shot between last October and this past February, Brewster said.

The shows’ stars are contracted for six seasons, which is standard for a television contract, Brewster said.

Gonzalo said it’s up to the audience and how it is received if the show continues past the first season. She said that after the season wrapped Patrick Duffy kept saying ‘only 13 more to go.’

Brewster said Duffy has “the Midas touch” when it comes to working on television.

Gonzalo thinks in Duffy’s entire television career he has only been unemployed for two months, one month between The Man from Atlantis and Dallas and another month between Dallas and Step by Step.

When asked about Duffy, Larry Hagman, and Linda Gray, the original stars of Dallas, Gonzalo said Duffy is like their dad, Gray like their mom, and Hagman is like a “funny uncle.”

Hagman, who “has had such a colorful life,” had the best and greatest stories, she said.

“We had a sense of family the minute we all met,” Gonzalo said.

Dallas starts Wednesday night with a two-hour episode airing on TNT at 9 p.m.