Another Notch in the Bedpost?

I’ve been contemplating—and worried about—writing this blog post for a long time now. My worry is a simple one: Will people be offended, take it the wrong way? I can’t answer that, but I hope not, because I’m compelled to discuss it.

I started a small-press horror publication in the fall of 2008. I enlisted the help of some online friends, we dubbed it Shock Totem, and in July of 2009 we published our first issue. (Most of you know this.) Ever since we published that debut issue, I’ve had one question constantly rattling around my head:

Does an author owe his support to the publications that publish his work?

That question pertains not only to me as a publisher but as a writer as well. Through four issues of Shock Totem, we have gotten some amazing support from authors we’ve published. But not all of them. Some hardly mentioned us at all, even when the issue containing their work came out. On a selfish level, I can’t help but find that disappointing. On a rational level, I understand that I have no idea why an author does what he does. There are things at play here that I am simply not privy to. I can dig that.

But back to the selfish side of things… As a publisher, I find myself leaning toward the notion that writers should be supporting those who publish their work. Because if the publisher is doing it right (relative to that particular publisher, of course), and if they’re a publication like Shock Totem where every issue is still in print and actively promoted, then the publication is fully and continually supporting the authors.

Back to the rational side of things… As a published author—hell, as a lifelong creative type—I completely understand that the muse commands one to look forward, to move forward, and create, create, create, to not waste time looking back. I also know how little time most artistic people have to actually focus on their art. So maybe some people simply don’t have the time. But that leads to the one thing I can’t rationalize…

When I finish a new story, I move onto a new one. But when I have a story published, I never move on. (All this can be applied, as well, to my musician days.) I can’t move forward and not look back in that regard. Because I want people to read my work! Do I owe it to that particular publication to support them, promote them? That’s debatable. But I sure as hell owe it to myself to support and promote my work! So I make the time.

And that is precisely what baffles me. (This does not take into account the fact that some authors publish bad stories best left forgotten from time to time.) Why do certain writers choose to not actively promote their work? Is a publication credit just another notch in the bedpost for these authors? As a publisher, sometimes it feels that way.

I have just three publication credits. The first was in 52 Stitches, Vol. 2. The publisher, Aaron Polson, 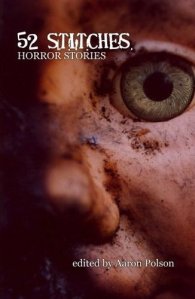 essentially put Strange Publications to bed—at least for the time being—when this anthology was published. But this book is still available, and I promote the hell out of it…because I want people to read my work! “By the Firelight,” my story in this anthology, is a mere 457 words, but I still want people to read it. It doesn’t matter that the publication is inactive or perhaps permanently closed, because I like my story and, in my opinion, I owe it to myself to promote it.

My second published work, “Goddamn Electric,” was in The Zombie Feed, Vol. 1. I’ve sent out copies for review, I’ve posted about it here on this blog and on the Shock Totem blog. I will continue to do so as long as it’s available.

I’ve done the same thing, and will continue to do so, with Epitaphs: The Journal of New England Horror Writers, which contains my story “A Deep Kind of Cold.” In a certain, roundabout way, I’m promoting my work right now.

Which brings me to the revelation of things…

I’m no longer sure you can have the former without the latter, but I know what I’m going to do. Always.

Wood makes a lot of valid points. A creative person does look ahead, but to become well-known or even known, they need to promote their work. By authors’ promoting their stories, they are promoting the publisher of their work. How hard is it to write a Facebook status update or a tweet about your story being in an anthology, magazine, etc.

Wood promotes his magazine and any anthology his stories appear in. He does this through his website and his different twitter accounts. He also attends different conventions and fairs too. He will be at the NEHW tables at the Queen City Kamikaze Convention on Feb. 18 in Manchester, New Hampshire.

3 comments on “Another Notch in the Bedpost?”