The beauty of this movie is that the characters know the plotline is ridiculous. They’re stunned and incredulous that Ron Jeremy’s penis is hunting them down, one by one. The director made a wise choice in not showing the menacing member for three-quarters of the movie, which results in a heightened sense of suspense—a technique used effectively by Steven Spielberg in JAWS and replicated here. 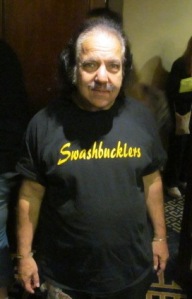 Notable performances include Jason Graham as Jonah, who is quick to accept that yes, a possessed penis is what they’re fighting here, and it’s a serious matter. Add to this Napier’s slightly crazed Vietnam vet, who has seen this kind of thing once before. His speech about the penis in ‘Nam that wiped out his whole platoon would come across as silly and trite if not for Napier’s ability to deliver it like a man who has seriously been traumatized by these events that “boot camp never prepared me for.”

Our heroes try to trap the murderous member, but their first attempt fails, and the survivors race to a radio tower to try and get help. Veronica Hart regains consciousness at this point (she’d been knocked into unconsciousness when Ron’s penis first attacked during their sex scene) and tries to catch up on the action.

It is Veronica, and her fabulous Kegel muscles, that eventually save the day.

This movie is not for the faint of heart, young children, or your mother. Overall, it’s fun, chock-full of one-liners and laughs, and definitely worth watching. Check out the DVD extras for a fabulous five-minute mockumentary on the movie’s special effects for one last laugh after the film ends. ONE-EYED MONSTER is a must-see for all “so bad it’s good” movie fans.

This review originally appeared on the Cinema Knife Fight website. You can see it by clicking here.