Jennifer Jostyn started out dancing before becoming an actress in movies like The Brothers McMullen, Deep Impact, and House of 1000 Corpses.

“I thought I wanted to be a ballet dancer.”

Jostyn studied ballet from a young age up until she was 22 or 23. She stopped when The Brothers McMullen won at the Sundance Film Festival and her career shifted from dancing to acting.

“I tried to sort of follow where I thought I was going to get work,” Jostyn said about changing careers.

There are moments that make her feel sad. These happen when she is watching live musical theater. This is when she misses ballet.

“I will see a show and I’ll think I would have loved to have done that. I like to try to never use the word regret in my life.”

She is appreciative of the work she has gotten and for working with two directors,

Edward Burns and Rob Zombie, both of whom she considers great directors and enjoys working with them.

She first met Burns through Michael McGlone, who was a co-worker at the restaurant where she was waitressing when she was 20 years old. McGlone told her one night when it was slow that he was working on a movie with “a cool guy who lives down in the West Village.”

McGlone also told her that Burns had no money, but was going to make something interesting. She received the role of Leslie 20 minutes after meeting with Burns. She spent the next couple of weekends going out to Burns parents’ house to shoot the movie.

She worked with Rob Zombie on House of 1000 Corpses. She didn’t realize at the time of her audition how big a deal it was being in a Rob Zombie movie.

Jostyn has also worked in television. She prefers movies, though, since she gets a little more time and freedom to play around with the role.

“Television shows usually happen pretty quickly, and there’s a lot of pressure to get it done quickly. You’re on a different kind of schedule.”

Her first starring role was in Milo, which she received two days before the film started shooting. She was first scheduled to play a much smaller role until she received the lead after being called into the director’s office. This happened on the day she had come to the production offices for a wardrobe fitting.

“I really loved that role and was excited to be able to go through the whole course of a 90 minute film. I’d never done that before.”

Jostyn is drawn to acting because she likes everything about it and being around creative people.

“I find it very exciting to watch great minds like Rob [Zombie] and Eddie [Burns] and other people I have had the pleasure to work with. I think they’re so smart and interesting and unique … I just wanted to be near it. I really don’t care in what capacity. It’s exciting to me to get to pretend to be different people. I can’t imagine who wouldn’t want to do that.”

Along with acting, Jostyn has also written and produced a movie, The Life Coach, back in 2005. She describes it as a mockumentary in the vein of a Christopher Guest movie, and it’s about a Hollywood life coach to the stars.

Another Rock & Shock has come and gone, the 10th one to be exact. It was another good one with even more vendors this year. The one thing that was lacking was attendees in costume. There just wasn’t a lot of people in costume. Here are pictures from the event.

Lew Temple from The Walking Dead.

From right to left: authors Robert Duperre, Kurt Newton, and Stacey Longo at the Sideshow Press and Shock Totem tables. 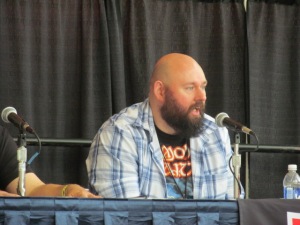 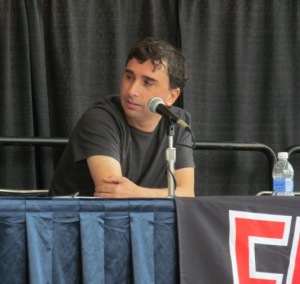 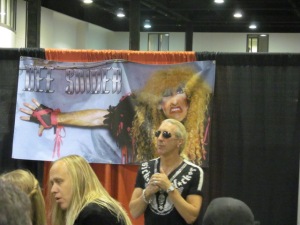 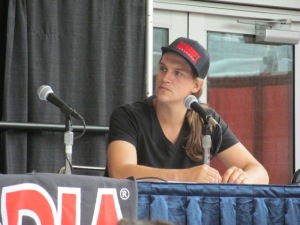 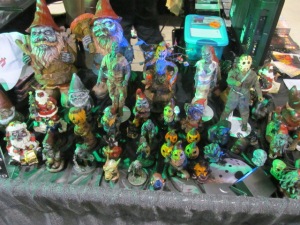 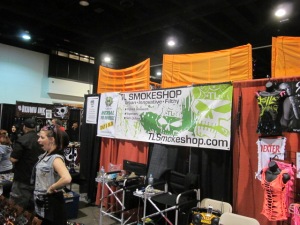 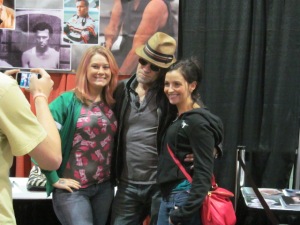 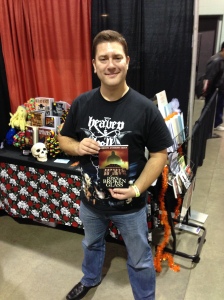 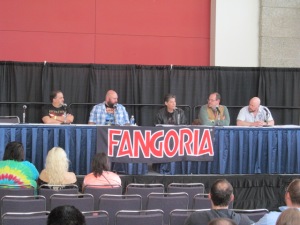 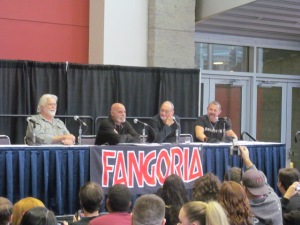 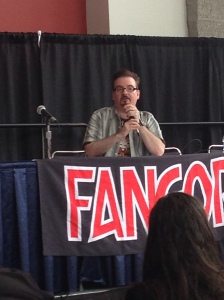 Items on the TL Smokeshop table.

Books on the Sideshow Press table.